← Party’s over, now the work begins
Managers are people too →

Soul of a Runner 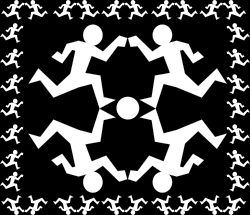 If you were to encounter me on the street, I hardly look like an endurance athlete. I’m on the brink of my 43rd birthday, short, and about 75 pounds overweight. Running is not generally the first thing one associates with middle aged women of my size. In fact, if you were to encounter me out on the trail, running looks pretty much like the last thing I should be doing. I am painfully slow (it’s not too hard to walk faster than I slog/jog), my face gets bright red, and I am generally huffing and puffing like a pack-a-day smoker. If I was being sensible I should be out walking, not pathetically attempting to do something that only barely resembles running. I have walked a half-marathon and I can extoll the many virtues of walking. The training is easier, you see more along the way, and if you have a good walking partner you save boatloads in therapy sessions. But regardless of all I have going against me and all evidence to the contrary, I can’t stop running.

There is something inside of me that simply yearns to be out running. I see other runners and it pulls strings deep within. The other day, I hopped on the bus and saw a couple out for their morning run. When I got off downtown and crossed the street, I saw them again. They had managed to run downtown in the same time it took me to ride the bus and I could see from their back-packs that they were running to work. As soon as I saw them, I didn’t think they were crazy or wonder how they did it, I just wanted to be them. I wanted to be the kind of person who runs to work.

I think the other thing skinny folks forget when they see us larger-proportioned athletes out there chugging away is that we can’t see what we look like. I don’t see the red-faced little plump girl. I only know how I feel from the inside. I hear my breathing and it reminds me I am alive. I feel the rhythm of my feet hitting the ground, and the cadence is comforting, if not mesmerizing. I feel the strength of my legs and am in awe of the distances they carry me. I feel strong, powerful, enduring. Or sometimes its more the way I feel after a particularly tough run. The running itself can be filled with aches, pains, and frustration, but when I have reached deep down into the reservoir I didn’t know existed and found a way to propel myself to the top of the hill, gone faster than before, or when my foot crosses the finish line, I feel like I am on top of the world. It’s not that elusive runner’s high, but the even more addictive drug of accomplishing your goals.

Why running?  I have no idea. Does anyone really know why we have the passions we do, and does it really matter? I have friends who find themselves through art, music, cooking, or raising their families. It is just this thing I do. I have gone years without running for one reason or another and yet I always come back to it. People ask me if I am going to do triathlons. Maybe some day I’ll take on that challenge, but I mostly think why would I want to do those other two things when I could be running. One of my favorite race shirts had this on the back – “Run.” I guess I love it so much because it was such a great reminder not to over-think; just run, period. Why do I run? Because I have the soul of a runner. Period.

2 Comments on “Soul of a Runner”