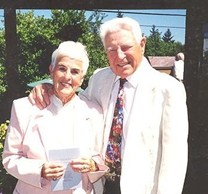 Brian’s grandmother passed away on October 16 after 98 very full years in this world. I won’t recount her history as there is already a very good description in her obituary, and I’m in awe of all she accomplished. We only shared about 14 of those 98 years together, after Brian and his extended family entered my life, but they were certainly memorable years nonetheless. Probably the traits that stood out most for me were her extravagant welcome and acceptance of people, and her natural ability to exaggerate the facts to fit how she felt about us.

From the moment Brian introduced me to Grandma (and I always called her Grandma), she immediately accepted me as part of the family. I recall some family function that Brian took me to in those early days of our dating. We had been together long enough to meet the family, but it can’t have been more than 3 or 4 months into our relationship. I had met Grandma and Grandpa, as well as his parents and brother and sister-in-law, but I had yet to meet many of the cousins and other extended family. As was the case in most those family functions, there was a cacophony of kids squealing, parents hollering, people talking, sports on the TV and a density of bodies in the family room that would most certainly have blown the fire code by a substantial margin. Amongst all this noise, Grandma silenced the room by yelling out, “Everyone, everyone, Brian has an ANNOUNCEMENT to make.”  I could see Brian’s mother’s eyes widen and the room went dead silent and I think there was a collective inhale as folks started to suspect an engagement was about to be announced. This was equally surprising to Brian and I as there was no such announcement coming and these things were not even in our consciousness at this point. Brian rallied and said, “Everyone, this is Lyda. Lyda, this is everyone.”  Folks quickly went back to their conversations at hand and perhaps more used to Grandma’s typical pronouncements were less thrown by this outburst than I was. Of course, in retrospect, perhaps Grandma indeed saw something in the cards that Brian and I just hadn’t figured out yet, as we were engaged before the end of the following year.

Another time, I was training to run a 10K and my training came up in conversation while we were out having dinner out with Grandma and the rest of the clan. Brian’s cousin Lyndsey showed up after us and Grandma pulled her aside and said, “Oh Lyndsey, did you know Lyda is running a marathon?!” Not sure how we got from 6 miles to 26 miles in the course of a single conversation, but by this time I had come to realize if Grandma liked you all stories got enhanced in the retelling. And again, in the end, she may have just been ahead of her time as I did indeed complete a marathon many years later.

She also told Brian and I how Brian’s cousin Brent had just taken a new job after college. According to her, he was so good with computers that after less than a week at the job, they asked him to run all the computer systems for the company. According to Brent, he was just doing inside sales and didn’t have any better computer skills than anyone else there. At this point knowing Grandma’s track record, I would say Brent’s got a bright career coming somewhere in his future.

Even when she got to the point when her memory struggled to hang onto the details of day to day life, she was always extremely glad to see Brian and me. She would tell us what a wonderful couple we were (to which Brian still maintains, “Hey, Grandma speaks the truth.”) and to come visit anytime. One more poignant episode took place when we were starting to first see signs of her impending dementia. Brian and I were staying over at their house for the weekend and I was chatting with Grandma after dinner. She looked at me and said, “Listen, you can’t stay in the guest room because Lyda and Brian are staying over tonight, but we’ve got plenty of room so please make yourself welcome.” Even in that diminished state, her sense of welcome and hospitality kept going strong.

At the time I met Grandma, I had already lost all of my own grandparents, and she took me in as if I had always been a member of the family. Brian and I chose early on not to have any children of our own and I have always been extremely grateful we never got any pressure or guilt from family about that choice. One mother’s day weekend, Grandma decided to buy geraniums for all of the mothers in the family. She just could not bring herself not to get one for me as she felt like that would have left me out, so in the blink of an eye she handed over the flowers and told me they were a gift in honor of my mother and that was that.

Grandma’s presence in my life was the true gift and I hope I can extend even a fraction of the welcome and hospitality to others that she showed to me. 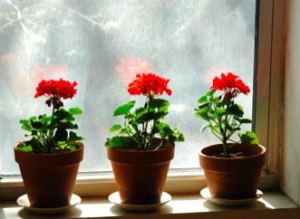