← Grandma speaks the truth
Small goal for a big girl →

A few weekends ago, Brian and I were at our favorite local watering hole helping a friend celebrate her birthday when a bar brawl broke out. Okay, maybe “brawl” is a bit of a strong word for what was ultimately the classic battle – two guys fighting over a girl, but a punch did get thrown, a shirt was ripped, and a candle holder was broken. Although it only lasted about 20 seconds, they were exciting seconds nonetheless. For those 20 seconds, all other sound was suspended as the rest of us absorbed just what was happening. After it was all said and done and the extremely drunk instigator was shown the door, then all conversation turned towards what had happened and who had done what during the chaos. Repeatedly, people said “let’s just stop talking about this” only to raise some other viewpoint or retell the showdown mere minutes later. Brian, being ever the risk manager, did not get involved but did rush over to move chairs out of the way to prevent further injury and/or collateral furniture damage. Only his lovable insurance-auditor-Swiss-heritage self would be so methodical in his assistance, but God love ‘im, someone has to think of the bar stools. He did say to me that he pondered for a moment what he might have done if the drunken idiot had been hassling ME. His first thought was that I could pretty much take care of myself and woe to the drunk who thought to try giving me a hard time; his second thought was this guy was way bigger than him and his only hope if push truly came to shove was to just go bezerker and hope for the best. Fortunately for everyone, that was a non issue and the Swiss in him prevailed.

A few other things stood out for me in those crucial seconds. First, a couple of the regulars, larger guys, ran over and restored order by restraining the two brawlers. These regulars kept their cool and their heads and simply stopped the two others from going at it any further. Their presence was a comfort and I regarded them both with renewed esteem. The bartender that night is a young woman who at first glance you might assume was hired for her looks. She’s young, blond, and probably one of the friendliest people you’d ever like to meet.  She is relatively new to the bar-tending scene and also the owner’s daughter. But she really showed her chops when said drunkard thought he wasn’t really quite ready to leave. She looked him in the face, told him to get on out the door, and did not take no for an answer. She did not raise her voice or get excited but somehow he sensed the gravity in her voice and left without further trouble. In that moment she was the drunk-whisperer, which is a gift no bar should be without.

I think the other reason we were all so transfixed by what happened is that these kinds of things simply don’t happen at this particular watering hole. The entire vibe of this place is relaxed and for people enjoying each others company as much as anything. Sure conversations are often animated with the assistance of liquid encouragement, but in the same way you might have intense conversation with friends around the dinner table, which is what Brian and I love about this place. In fact, we generally drink modestly and Brian gets as excited by their homemade ice cream as he does by their Hendricks martinis. It struck me that evening that people who go too far and who cannot hold their liquor are bad for business. No one really wants to spend time with someone who can’t respect the boundaries of common decency or even common sense. I suppose every bar is a little different and there are those places that cater to the Carnival Cruise Line philosophy of the harder the party the better, but just because a place has “bar” in its name doesn’t mean its a place for drinking with wild abandon.

This particular bar is where Brian and I go to see our friends – people we have gotten to know far better than any other business I have ever frequented. We’ve celebrated my 40th birthday there, Brian’s 40th birthday there, our 10th wedding anniversary, and my last day at Cobalt. I have happy hours there with my girlfriends. We have taken any number of family and friends there when they come to visit in the hopes they will see some of the same magic that we do. Sometimes we go for no reason at all. But, it’s not all one way either. We have helped celebrate their birthdays, and watched them perform in shows, even had them over to our home for dinner. My former suburban self never would have even considered being so connected to people that I met “in a bar.” Happily, the Universe felt that was a misconception my life needed correcting. The people here are family.

Last weekend, we were chatting with one of the bartenders who did not happen to be working the night of the big brouhaha. He mentioned that fellow had been trouble before and it was probably only a matter of time before he had to be shown the door. I asked if that guy was “banned for life” and he said he was in his book and he did not have any patience for that kind of behavior in this place. He thought the owner might feel differently as he believed in giving people second chances, but he wasn’t so sure in this case. That comment said so much to me about both their characters and in that moment I loved them both. 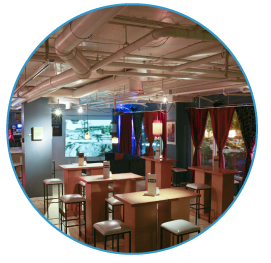 If you need me, I’ll be enjoying good drinks, fine food, and laughing with my friends at the bar.