I learned today that an old friend and colleague, Craig Pfaff, passed away back in May. He had had a stroke in 2015/2016 and his health was never quite the same after that. I knew when I got a “non holiday” card from his wife that it would likely be bearing bad news.

A little about Craig and me. When we first started working together, I was 26/27 and in the middle of my marriage ending. Craig would have been probably around 45 at that time. We were not so much friends as work colleagues, but when I showed up at the office one morning without my wedding band and nothing but heartbreak in my eyes, he stood up and said we were going to breakfast. I don’t recall anything in particular that he said or didn’t say, but it was exactly the right thing to do.

Later that same winter the power was out at my apartment for 4 or 5 days. At first I slept under a mile-high pile of blankets at home, but once Craig found out, he called his wife Robyn and they set me up that night on their hide-a-bed. No big to-do about it, but it simply was not acceptable to him for me to continue (like the young idiot that I was) to keep staying at home.

Craig was both a friendly back-slapping salesman and often an openly cantankerous fellow. He decided to leave the company where we worked but told no one of his plans. I saw him, briefcase in hand, and he said he was leaving. Not in two weeks or the end of the day, but right then and there. He also said he didn’t ever trying to keep in touch with work colleagues because it never works out. I was in a total state of shock as he walked out the door, presumably never to be seen again.

Fortunately for me, the salesman side of him over-rode his melodramatic declaration of never being in contact. He kept track of everyone’s birthdays and I would get emails each year wishing me well.

Fast forward to 2007 when I made my own departure from that company. As fate would have it, we happened to be unemployed at the same time. We would meet for coffee to compare stories about interviews gone wrong or potential opportunities. I was contacted by a partner to our old company about a possible business venture and Craig and I hashed out the pros and cons and discussed making it a business partnership. That ultimately fell through, but I have to say there is nothing that makes the ego-killing experience of being unemployed more bearable than having a co-conspirator. Ultimately, we both got jobs, but ever after Craig was one of my go-to people and mentors for work-related challenges.

Over the years, our contact waxed and waned, but the coffee dates continued. When I broke my foot, he came and picked me up. After his first stroke, I gave him the ride. Meet ups became fewer and farther between as his health struggles increased. Finally, he sent me a note and said he could no longer could keep up with trying to stay in touch with people and this time he meant it. I did not hear from him again after that, in spite of occasional reach-out attempts on my part.

Ours was not a deep or really even particularly close relationship. We did not share much about our personal lives, other than maybe an update on his son Michael’s career (so still, work related). It was much more akin to mentorship, but I guess you just never know the lasting impact someone’s kindness can have on your life. I have had meet-ups with lots of other folks over the years who are on their own job hunts and I did not put two and two together until now that my coffee dates with Craig were largely the inspiration.

So, for Craig, I encourage all of you to take someone to breakfast or coffee and in a low-key and maybe even slightly cranky way, spread a little kindness to someone who needs it. 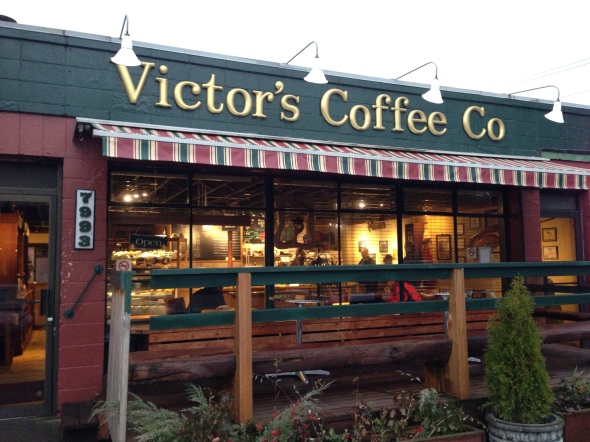 I don’t have any pictures of Craig (he didn’t even have one on his LinkedIn Profile), but this is where we held many of our coffee meetings…