← Life is too short to be anything other than absurd
Facebook doesn’t replace real life – sometimes we all need a reminder. →

Why Endurance Events? Why not..??

The training season is coming to a close. We’re in the tapering phase where we rest and heal our bodies in preparation for the big day. On June 25 I will walk 13.1 miles in Seattle’s Rock N Roll Half Marathon. I haven’t posted much this season and I knew going into the training that walking a half marathon would be a far different experience than running my first ever marathon. For starters, I have already completed a couple of half marathons, including the Seattle Rock N Roll Half back in 09, so I pretty much know what to expect. And last year was so monumental for me in accomplishing one of my lifetime goals, that this season has been a much quieter, calmer experience.

Many runners experience post-marathon blues after they complete their first (or fastest or Boston or…) marathon. I did not have this experience after my marathon – mostly I was filled with a tremendous sense of gratitude and the enduring knowledge that we are all capable of fulfilling any goal we set our hearts and minds to. However, I will confess to feeling a little melancholy as I approach this year’s event.  I guess it’s a little like climbing Mt. Rainier after having summitted Mr. Everest.  Maybe it is because the anticipation is gone. The fear that you don’t know the outcome mixed with the excitement that you are really doing it is not present.  You still have to train and work for it because nobody wakes up one morning and says I think I’ll stroll up to the summit of Mt. Rainier today, but it’s just not the same. Honestly, I feel a little ambivalent and even a little jealous as I watch my teammates fill with excitement over their first time at “the show.” Oh, it’s not stick my leg out and trip them jealousy. It’s more wistful and nostalgic and it brings back memories of when I was in their shoes.

So, why did I come back? I have proven to myself twice now that I can train for and successfully run a half marathon on my own. I don’t need Team in Training to complete this event and, frankly, I don’t need to prove to myself that I can do this at all. I could have stayed home and had a pleasant spring sleeping in on Saturday mornings. On the other hand, I can’t imagine myself not being here, not being part of this group. For one thing, there is still that pesky blood cancer that insidiously takes the lives of young people far too soon (and I include my 41 years young friend Gil in that group). Training with a purpose, training as a way to do something more than just 13.1 or 26.2 miles, is one way I can leave a positive ‘footprint’ in this world. Secondly, training in a group, with people cheering and supporting you, is far more rewarding than training alone – even if the act of running or walking is ultimately a personal one.

But that doesn’t really answer the question of why do endurance events. I’m not sure I actually know the answer. For 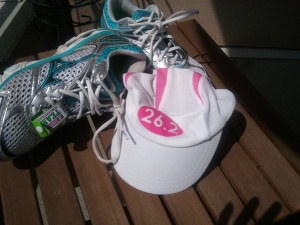 whatever reason, they are simply in my blood. Or maybe I have a bit of George Mallory’s “because it was there” sensibilities. I have 2 weeks to go before completing this year’s event and I’m already asking myself what I think I might like to do next.  I just finished reading Marshall Ulrich’s Running on Empty (thanks Mark Maraia for the recommendation), which lead me to watch Running the Sahara on Netflix, about 3 men who run across the Sahara desert. Brian left the room mid-way through because it was too hard for him to watch how these men abused their bodies, but I could not peel my eyes away. I have zero desire to run 2 marathons a day for 111 days in a row (in the desert no less), but do I walk another marathon? Maybe next year I could run the half? Dare I even consider walking an ultra event?  There are no definitive plans at this point and I promised Brian the summer for the two of us to be active together, but come this fall I am sure I will get that unexplainable itch, tie up my laces, and go out on the trail again, chasing the next mountain – big or small.